Kuching, Malaysia; an old colonial city which is named after the Malay word for cat.  Not sure why.  Situated on Kuching River it has a gorgeous promenade with views of the architecturally interesting (is it a hat?! is it an umbrella?!) New Sarawak State Legislative Building.

You’re in the mood for a bit of old school architecture.  You’ve been longing for a nice breezy walk along the riverbank, making stops for ice cream and beer and trying out new foods, after all that’s what Kuching is known for; the food.  Getting here from Brunei was easy too, a bit of a drive drive, short flight and shorter taxi ride.  So the Hotel (Grand Margherita) isn’t anything to shout about but it’s close to the City Centre and breakfast is included.

Never, ever have you had such terrible luck with breakfasting at an hotel.  On your first morning you arrive to breakfast at 9ish and the hostess (generously) offers you a ‘shared table’ with a family of 3.  One quick look at the mid-tantrum-snot-covered-toddler throwing chicken sausages on the floor and you graciously decline.  So maybe not that graciously but she got the message.  10 minutes later you manage to find your own table.  It’s littered with dirty plates, more chicken sausage and covered in omelette, which you get cleared away.  You delicately place your cardigan over the back of a chair and leave your room key on the table- an international sign to show that the table is taken, or so you thought, When you return with a cup of weak tea, dry toast (having been informed that the butter supply has finished) and a couple of the ubiquitous chicken sausages you find a cheeky old man has commandeered your table.  Unbelievable.  You make it clear that this is your table, that’s your cardigan and your room key and that you’re not looking to share.  The waitress sees the commotion and takes him away.  So then you and Hubs play tag team at keeping the table occupied in case any other usurpers are lurking in the midst.

One bite of the chicken sausage and you understand that wretched toddler’s plight.  A waiter appears with what must be the last mini-butter in the establishment that was obviously tucked away in some deep corner of the fridge, judging by the temperature.  Hubs queued for an omelette; took 20 minutes.  A few mouthfuls later you’ve both had enough and decide that it just isn’t working.  So you leave with an empty stomachs.

You decide to head for the nearest, biggest mall.  There must be food to be eaten there and you’re in luck.  There’s a Starbucks.  Hello, civilisation! 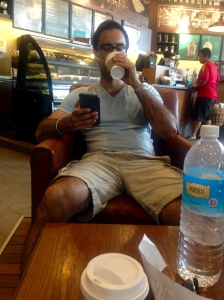 After your second (but really your first) breakfast of the day you venture round the small city.  there are some pretty sights including an old Courthouse; being a bit of an expert on British Courts you can say with some certainty that it is finer than any County Court in England and Wales.

You take a little cruise along the river and pass the State Assembly and an old dockyard left behind by the old white rajahs, in ruins, which somehow makes it more beautiful. 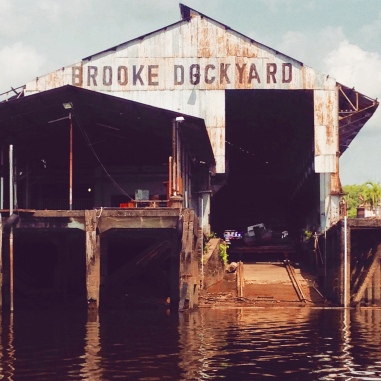 The next day you get to breakfast just as it’s opening up.  Smartest thing you’ve ever done- not a single person queuing for omelettes.  You embark on a trip to Indiatown.  It’s pretty much boarded up because of Ramadan. So much for buying your mum some pretty silk.  Also means that you’re stuck for lunch and dinner as it seems everyone is celebrating with their loved ones.  Turn out all those lovely food stalls along the promenade are shut too.  Having walked round the city three times and not found a single place open for lunch you and Hubs are getting pretty hangry.  You’re ready to settle for a KFC but even that’s shut.  Unprecedented.  So you walk up to the nearby Chinatown and thank God for the Chinese.

2 thoughts on “Starving in Kuching”